Four years after Corporate Headquarters participated in just one Developmental Sprint®, we still see the impact.
Like most technical people, I had discounted the value of human interaction. With the Sprint™, we made a deliberate effort to put people in groups who normally didn’t interact because of their departments or levels. It broke the ice. It increased communication. Some people got re-energized and saw a boost in their careers. And, we, as the company, benefited from their increased engagement.
As well, The Developmental Sprint® certainly brought us together as an executive team. That appreciation for each other and for spending time together has spread throughout our corporate office, and definitely built a collegiality that pushes our other efforts forward.

– Ernest H. Wu, CEO and son of the founder, Y.C.L. Susan Wu
Desire to impact others

ERC is an engineering, technical, IT, and scientific services firm, providing a broad array of support to the US Department of Defense, NASA and commercial clients. ERC works in many areas of advanced military and space research and development: test evaluation; operations and maintenance; and IT, software and network administration.

Many of its employees are, quite literally, rocket scientists.

Since being founded, the company had grown rapidly, leap-frogging over itself to add more support departments at its corporate headquarters in Huntsville, Alabama. In 2013, buoyed by continued growth, ERC moved to larger offices. Nearly each employee had some kind of view out of the expansive windows and more space. Located next door to an outdoor mall with upscale dining, the office had all the trappings of success. Yet something felt very wrong.

Karma Malone, the most senior employee, summed it up best. “Most days when I go into my office and sit down behind my computer. I don’t hear anyone or see anyone except for whomever calls me on the telephone. I can go home at the end of the day without ever having interacted with any other colleagues.”

Moving from cramped quarters where employees interacted because they were crowded together to a larger space had reduced a critical part of company culture: communication.

In the absence of interaction, people and departments become more isolated. Silos developed not out of any bad intent, but from the lack of interaction that builds bridges and chips away at walls.

By 2015, ERC needed to do something different to regain its corporate office culture.

Founded by Susan Wu, the first woman to be awarded a Ph.D. in Aeronautical Engineering at Caltech, the company is populated by trailblazers and has a long history of warm inclusivity. Their employees have long-felt like they belonged and they, in turn, have treated people outside the corporate office, whether they were customers, vendors, or employees from one of the field sites, with genuine warmth.

The executive team, led by Ernie Wu (Susan’s son), decided to reboot the corporate culture through something they had never tried before – an office wide push to challenge deeply held assumptions about themselves and/ or others in the corporate office through a developmental program based on the ground-breaking Immunity to Change™ model created by TDE principals Dr. Robert Kegan and Dr. Lisa Lahey. The executive team believed the effort would:

Wu worked with TDE’s Andy Fleming to meet the company’s objectives, to increase communication, and to meld the corporate team together after the developmental effort. Critical in the process was that every employee, no matter their level, from the CEO to the receptionist, participate – and participate in mixed groups with other departments and levels.

“When you pull a few people to get extra attention, whether it is through coaching or workshops of one kind or another, it has the unintended consequence of pushing others down. They get the message that the organization doesn’t value them very highly, that it doesn’t see much potential in them. Their morale and performance go down. The whole effort becomes a zero-sum game,” Wu said. “Mixing everyone together said that we were all equally important to the company.”

ERC instituted a six-week Developmental Sprint®, customized to the company and its employees. Everyone at ERC headquarters pursued professional improvement goals related to the accomplishment of their everyday work during this period.

Members of each peer coaching group in the Sprint™ came from all levels within the corporate office. The default choice would be to form groups that consisted of people from roughly the same organizational level – e.g. senior executives with senior executives. To be as egalitarian and transparent as possible, ERC and TDE chose instead to assign partners alphabetically. This democratized the process. Senior executives met in groups with middle managers, frontline staff, and so on.

The message was clear: Everyone can grow. Everyone’s growth matters the same. Everyone can (and is expected to) contribute to everyone else’s growth, regardless of differences in background, rank or experience. The Sprint™ process kicked off with a customized “Launch Workshop” (appropriately named for a rocket science company) and weekly on-the-job experiments by each participant, brief One-on-One Coaching sessions from TDE’s team, and most importantly, weekly meetings for the peer coaching groups—each following a set protocol to foster support and accountability for each member’s improvement efforts. The Sprint™ ended with a “Closing Workshop” that enabled participants, individually and collectively, to share, extend, and consolidate their learning. 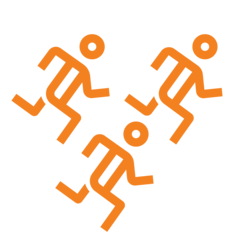 Developmental Sprints® to surface, address and change issues in individual performance, increase feelings of teamwork within the organization, and ensure resilience of the sales team longer term.

Taking the First Step to An Everyone Culture

Wu reflected, “In a traditional approach to development, [frontline] people would have been ignored. Now they are reborn. They see their place in a bigger picture, and that’s important… People feel more valued and are more open to change; and we are all able to move faster.”

As one might expect, there were some significant individual breakthroughs. Catie Willis from Accounts Payable felt a new sense of connection among people at headquarters:

“Regarding my own improvement goal to communicate better, the most significant shift is that I speak and write more clearly and precisely. I have the correct tone and am getting a better response and follow-up. Beyond that, I have to say that I knew I had a good core of friends here, but I didn’t realize just how much people care and can support me… Now I see that more people than I realized really do care and want to help me… It is also a win-win. It helps ERC grow, me grow, and it helps our customers.”

Four years after the conclusion of The Developmental Sprint®, Wu reflected on the impact of this initiative for himself and for ERC.

“The quality of relationships in the office is better for having spent an intense period in small groups… There’s been a lasting effect… more collaboration and communication in the office.

An unexpected and even more dramatic result was that some people who might have felt adrift and devalued – they all got their footing. They’re more engaged now, asking questions and making suggestions in meetings. And that’s an important impact. Their lack of engagement and confidence going forward could have held us back.”

Wu definitely has seen results from The Developmental Sprint® process. The Finance Department restructured a few months after the Sprint™ with people appointed as leaders and others who no longer reported directly to the CFO. People could have taken that badly. Instead there was broad support for the new Finance organization with greater communication and renewed purpose.  He says, “I’m confident [The Developmental Sprint®] contributed to our growth over the last four years. It wasn’t the only thing, mind you – there are a lot of factors that go into the kind of explosive growth we’ve experienced – but it definitely was an important factor. Better communication among members of the company, especially the executive team, cannot be undervalued.”

The four biggest outcomes for the organization:

“It makes me think we can surmount anything that happens. To have an organization that can adapt – that’s precious,” says Wu. “That’s the best competitive position, and it gives us the best possibility of doing outstanding work.”